Press Center for All Together Now #8 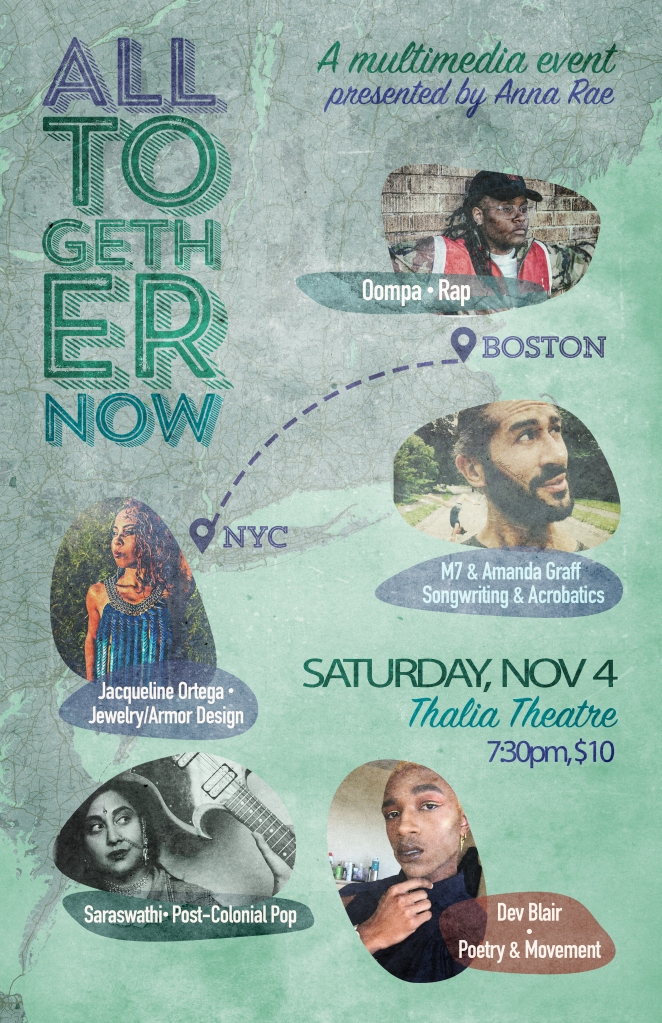 The final installment this year of multi-media series All Together Now (ATN #8)  will be at The Thalia Theatre in Central Square (288-A Green St, Cambridge) on Saturday, Nov. 4th at 8 pm. All Together Now (ATN) is a multidisciplinary art series that creates space for women, people of color, and LGBTQ+ performers in partnership with allies.

Performing for ATN #8 is a truly eclectic mix of artists and performers including poet and movement artist Dev Blair; musician and purveyor of postcolonial pop Saraswathi Jones; poet, rapper, and educator Oompa; music and acrobatics duo Amanda Graff and Muhammad Seven; and jewelry/armour designer Jacqueline Ortega. Tickets and more information about the series can be found at alltogetherbos.com.

ATN nurtures community and collaboration amongst performers, and this installment features a brand new collaboration between musician Muhammed Seven (M7) and acrobatics and circus artist Amanda Graff. Their original performance titled “Don’t Try This At Home” weaves together Graff’s fluid and emotive circus performances with M7’s blue-collar folk lyricism into a piece about their 20 years as a couple.

“All Together Now’s openness has inspired some participants to step beyond their comfort zones,” according to a recent article by Amelia Mason for WBUR’s The ARTery. “In May, [Jenee] Halstead and Mark Lipman, both Boston-based singer-songwriters, debuted an original performance art piece that delved into deeply personal issues, including sexual assault.” In September, the musician Paul Hansen of The Grownup Noise debuted a collaborative piece with dancer/choreographer Amy Cook, in which Paul performed dance for the first time.

The open and inclusive vision of Artistic Direction Anna Rae is a notable part of the series. According to Hansen, Rae “is nurturing something that’s unique.” Said Halstead in an interview, “[ATN] was the first time where I was in a performance environment where I felt like everybody was taking part in it. The audience was there, they were engaged, they were excited.”

All Together Now is supported by the Live Arts Boston Grant from The Boston Foundation.

Dev Blair (she/her/hers or they/them/theirs) is a current 3rd year at Boston University. Raised in both Atlanta and Orlando, they work as an interdisciplinary artist, acting, singing, writing for stage and screen, occasionally model and write poetry, and additionally work as an activist. They are a co-founder of Boston University’s #PoorAtAPrivateUniversity low income student support group and use their work to encourage people to be better allies via expanding their awareness of oppressive systems and providing them with action and resources to engage with to in order actively help dismantle these systems.

Saraswathi Jones is a Boston musician and purveyor of postcolonial pop.  Her work draws from the well of South Asian history, culture, and aesthetics and reflects on life in immigrant America. She released the solo EP Lingua Franca in 2013, and fronts Boston band Awaaz Do, who released their debut EP Kite Fight in 2016 and received an Iguana Music Fund grant in 2017 to record their next album. Ms. Jones helped found Hindie Rock Fest, a local music festival featuring South Asian American artists from a broad array of genres, and currently serves as board president of Girls Rock Campaign Boston, a feminist nonprofit empowering girls through musical performance and education. saraswathijones.com.

Oompa is a nationally-acclaimed, Boston-born, poet, rapper, and educator, who is forever representing the queer, black, orphaned, hood kids and them. Oompa is the winner of the 2017 Women of the World Poetry Slam, and a finalist at the 2017 National Poetry Slam.  She has been featured in Huffington Post, Allston Pudding, Mass Apparel, and KillerBoomBox among others. Oompa’s debut album, Nov. 3, was named one of Dig Boston’s Top 30 Local Albums of 2016, one of Allston Pudding’s Favorite albums of 2016, and her sound has compared to that of Lauryn Hill, J.Cole, and Talib Kweli. Oompa has performed alongside acts such as Latrell James, STL Gold,  and Tef Poe, and is currently working on her fall tour, The Black Hole Tour. Currently based in Boston, MA, Oompa is an organizer, mentor, and coach, as well as a member of media brand and collective Hipstory, and co-slam master of the House Slam.

“Dont’ Try This At Home” is an original performance from married-to-each-other artists Amanda Graff and Muhammad Seven (aka Nima Samimi). It weaves together Amanda’s fluid and emotive circus performances with M7’s blue-collar folk lyricism, into a piece about their 20 years as a couple (from age 20 to age 40). Frivolous games, true stories, songs of heartache and beautiful acts of the circus arts will carry you through the laughter and the tears of what it’s like to really know a person. We’re inviting you into our story. Join us. https://www.patreon.com/muhammadseven

Boston based jewelry designer, Jacqueline Ortega, specializes in one-of-a-kind pieces, custom designs and Heavy Metal Apparel. As a true believer in the freedom of self-expression, Ortega Jewelry Designs, founded in 2011, is inspired by the concept that jewelry is an extension of one’s personality. The Universe inspires Ortega’s work and for custom designs, she captures the person’s personality in the piece itself. You can find beaded jewelry, embellished chains and edgy body jewelry using gemstones, sterling silver, pearls, crystals, feathers, wire, various metals, fabrics, and salvaged materials in her collections. Ortega’s Heavy Metal Apparel line is inspired by medieval and modern fashion. It is conceptual body armor made from scales and chainmaille, creating a new era of strong, wearable jewelry pieces and expressive artistic fashion…A clash of the ages!