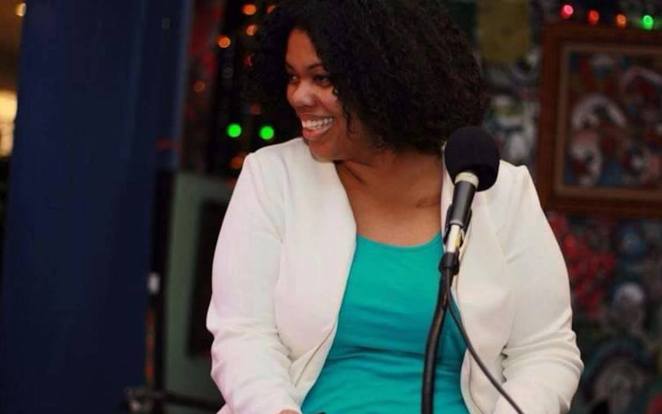 DiDi Delgado is a writer, activist, freelance journalist and poet. She is currently Head of Operations at S.O.U.P (The Society Of Urban Poetry) a collective of artists and musicians whose mission statement, is to help shed light on the diversity amongst creative individuals and groups across gender identity, sexual orientation, race, ethnicity, faith, ability, age; and aims to bridge the gaps between these intersectionalities. She has facilitated writing workshops at the Haley House and the Dudley Café in Dudley Square. She has served on the leadership team for the ACLU’s BCPA Committee, the Boston Branch of the NAACP’s Young Adult Committee.

As an organizer with Black Lives Matter Cambridge, she is constantly on the front lines blazing pathways, creating channels and fostering connections in support of other activists. She is the recipient of the 2015 Jack Powers Stone Soup Savor award which is awarded annually to one poet that serves the Boston and Cambridge communities as a mentor while consistently providing distinguished contributions to the art of poetry. DiDi has participated in Michael Rothenberg’s 100,000 Poets for Change, adjudicated with Boston Poet Laureate and others for the 2015 Mayor’s Poetry and Prose program, performed for various venues such as: Boston Center for Arts, Boston City Hall, Emerson College performing under the direction of Akiba Abaka and Walter Mosley, Boston City Councilor At Large Ayanna Pressley’s Jump Into Peace initiative and co-curated an event for Illuminus during Hubweek 2015. Deeply passionate about both her local and global community; she believes that poetry and activism go hand in hand.